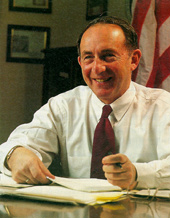 Mr. Strassmann was Distinguished Professor of Information Sciences at George Mason School of Information Technology. He is Contributing Editor of the Armed Forces Communications & Electronics Association Signal magazine and serves as the Chairman of the Board of Directors of Queralt, a company that offers Radio Frequency Tag identification services for high-value objects. He was leader of the InfoSecurity practice at the International Data Corporation and retired after that organization was sold to an international firm.

He holds registered U.S. Trademarks for Return-on-Management®, R-O-M®, Information Productivity® and Knowledge Capital®. In 2009 he received an Honorary Doctorate degree from the George Mason University.

After serving as an advisor to the Deputy Secretary of Defense since 1990 he was appointed to a newly created position of Director of Defense Information and member of the US Senior Executive Service, an appointment awarded to only 0.3% of DoD staff.

He was responsible for organizing and managing the corporate information management (CIM) program across the Department of Defense which included a major cost reduction and business reengineering program of the defense information infrastructure. Strassmann had policy oversight for Defense Department’s information technology expenditures.

He is a 1993 recipient of the Defense Medal for Distinguished Public Service - the Defense Department’s highest civilian recognition, also awarded to four presidents.

In 2002 he was recalled to government service as the acting Chief Information Officer of the National Aeronautics and Space Administration, with direct responsibility and accountability for the NASA computing and telecommunication information infrastructure. After completing his assignments in 2003 he retired from government service after receiving the NASA Exceptional Service Medal for improving I.T. architecture, security, and services.

Strassmann joined Xerox in 1969 as director of administration and information systems with worldwide responsibility for all internal Xerox computer activities. From 1972 to 1976 he served as founder and general manager of its Information Services Division with responsibility to operate corporate computer centers, communication networks, administrative services, software development and management consulting services.

He introduced major innovations in global telecommunication management. From 1976 to 1978 he was corporate director responsible for world-wide computer, telecommunications and administrative functions. He was a key contributor to shaping Xerox business strategy for office automation. He developed new methods for evaluating the productivity of computer investments.

Until his retirement from Xerox he served as vice president of strategic planning for the Information Products Group, with responsibility for strategic investments, acquisitions and product plans involving the corporation’s world-wide electronic businesses.

His public involvement includes presentations to the US Senate, the US House of Representatives, the Board of Governors of the Federal Reserve, the British House of Commons, and the USSR Council of Ministers.

Strassmann served on the Boards of Directors of Alinean, InSite One, McCabe Software, Meta Software, and Trio Security.

Prior to joining Xerox, Strassmann held the job of Corporate Information Officer for the General Foods Corporation and afterwards as the Chief Information Systems executive for the Kraft Corporation from 1960 through 1969. His involvement with computers dates back to 1954 when he designed a method for scheduling toll collection personnel on the basis of punch card toll receipts.

He earned an engineering degree from the Cooper Union, a master’s degree in industrial management from MIT, and a PhD from George Mason University

He is author of over 250 articles on information management and information worker productivity. His 1985 book Information Payoff: The Transformation of Work in the Electronic Age attracted worldwide attention and was translated into a number of languages.

His 1990 book, The Business Value of Computers, covers his research on the relation between information technology and profitability of firms.

His 1993 book, The Politics of Information Management offers guidelines on organization of the information function for greatest effectiveness. A companion volume, The Irreverent Dictionary of Information Politics reflects on the inconsistencies in information management practices.

His 1997 book, The Squandered Computer was Amazon.com’s #1 best selling book on information management.

His latest books include Information Productivity - Assessing the Information Management Costs of U.S. Industrial Corporations (1999), The Economics of Corporate Information Systems (2007), Paul’s War (2008) and Paul’s Odyssey (2009) and The Computers Nobody Wanted: My Years at Xerox (2009). His lectures are now available as video recordings on the internet.

Strassmann was chairman of the committee on information workers for the White House Conference on Productivity and served on the Department of Defense Federal Advisory Board for Information Management, the Army Science Board, and the Defense Science Board. He is a Distinguished Engineer of the Association for Computing Machinery, life member of the Data Processing Management Association, Chartered Fellow of the British Computer Society, senior member of the Institute of Electrical and Electronic Engineers, and member of the honorary engineering society Tau Beta Pi. He authored the code of conduct for data processing professionals, was recipient of the 1992 Award for Achievement by the Association for Federal Information Resource Management and was named the Government Executive of the Year; received the 1992 International Industry Award for advancing the adoption of Open Systems, the 1996 Excellence Award for Business Engineering. In 1997 he was named to the CIO Hall of Fame by CIO Magazine as one of the twelve most influential CIOs of the decade. In 2000, he was cited by the Assistant Secretary of Defense for Command, Control and Intelligence for his pioneering work as one of the executives responsible for advancing the cause of U.S. information capabilities.

He is recipient of the 2006 Neal Business Journalism award for a series of articles on the Economics of Information and the AFCEA SIGNAL award for best feature article in 2011.

Strassmann is recipient of the Gen. Stefanik Medal for his actions as a guerilla commando from September 1944 through March 1945 in Czechoslovakia.